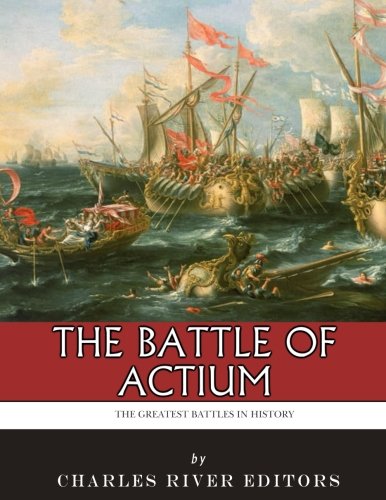 The Greatest Battles In History: The Battle Of Actium

*Explains the events that led up to the Battle of Actium, as well as the differences in the opposing navies and tactics.*Includes ancient accounts of the Battle of Actium.*Includes a comprehensive discussion of the facts and myths surrounding the battle.*Includes a bibliography for further reading.The names of history’s most famous battles still ring in our ears today, their influence immediately ...

nderstood by all. Marathon lent its name to the world’s most famous race, but it also preserved Western civilization during the First Persian War. Saratoga, won by one of the colonists’ most renowned war heroes before he became his nation’s most vile traitor. Hastings ensured the Normans’ success in England and changed the course of British history. Waterloo, which marked the reshaping of the European continent and Napoleon’s doom, has now become part of the English lexicon. In Charles River Editors’ Greatest Battles in History series, readers can get caught up to speed on history’s greatest battles in the time it takes to finish a commute, while learning interesting facts long forgotten or never known.Every era has watershed moments that shape the arc of history, and for Ancient Rome, few were as decisive or monumental as the Battle of Actium in 31 B.C. The battle’s importance is understandable given the stakes and people involved; Actium pitted the joint navies of Cleopatra and Mark Antony against the battle fleet of Octavian. In many ways, this climactic battle was the culmination of a years-long power struggle between the heirs of the assassinated Julius Caesar, with Octavian being his legally appointed heir and Antony being his longtime lieutenant and trusted advisor. Antony had even taken Caesar’s Egyptian mistress as his own.As one of Rome’s most famous battles, the Battle of Actium has taken on a life of its own in popular memory. One of the longest-held myths about the battle is that Cleopatra, sensing defeat, began to sail away from the fight in the middle of the day, and the lovestruck Antony followed her with his own ship, abandoning his men in the middle of the fight. While that popular myth would be in keeping with explaining Cleopatra’s irresistible charm and magnetism, contemporary accounts of the battle do not suggest it was actually the case. As night approached, Antony and Cleopatra spotted a gap in the now thoroughly jumbled enemy line, and ordered their ships to speed through it without delay, making for Alexandria with all speed and abandoning their entire navy to its fate. Only 60 of Antony’s ships, less than a fifth of his original strength, survived. It was a crushing blow, for Octavian and his generals had virtually annihilated Egypt’s seaborne power, and Antony’s with it. While Antony was able to limp away from the disaster which befell his fleet, he and Cleopatra were now reduced to hunted fugitives virtually bereft of an army, and the abortive siege in Alexandria was nothing but the mopping-up. The war would end with Antony and Cleopatra both famously committing suicide.The results of Actium implemented the most radical change in the history of Rome, at least until the Empire was split into East and West centuries later. Octavian’s win ensured the creation of a hereditary imperial dynasty that would steer Rome to even further greatness and remain virtually unchallenged by any serious pretender for decades. In that sense, Actium also represented the final gasp of the moribund Roman Republic, which would be replaced by an Empire that would endure for a further 500 years.The Greatest Battles in History: The Battle of Actium comprehensively covers the events that led up to the battle, the battle itself, and the famous aftermath. Along with maps of the battle and pictures of important people and places, you will learn about Actium like you never have before.